What a wonderful surprise!  A good friend messaged me earlier in the week to check my address and let me know he was posting something up to me.  It arrived this morning and was a bottle of Dalwhinnie 15-Year-Old Whisky.  Do surprises get any better?  I’ll let you know once I’ve had a dram this evening…. 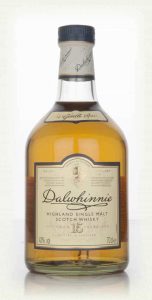 Another to add to my current whisky collection, which I blogged about here.

That’s right, there’s no ‘e’, or at least not in the country who invented the stuff!

I’ve always liked the idea of drinking whisky, but only since moving to Scotland have really begun to appreciate it as it really should be.  And I think it’s fair to say my taste in whisky has also matured, moving a little further afield than the classic, yet easy to drink Speyside’s to slightly more acquired Highland and Island drams.  That’s not to say I don’t still like a nice Speyside, just that they’re will be more than a bottle of 2 of other stuff in my drinks cupboard, at least over the festive period.