I’d blogged about using Home Assistant here, but this was running in a Docker container.  I’ve found a much nice way to run it in an iocage jail… 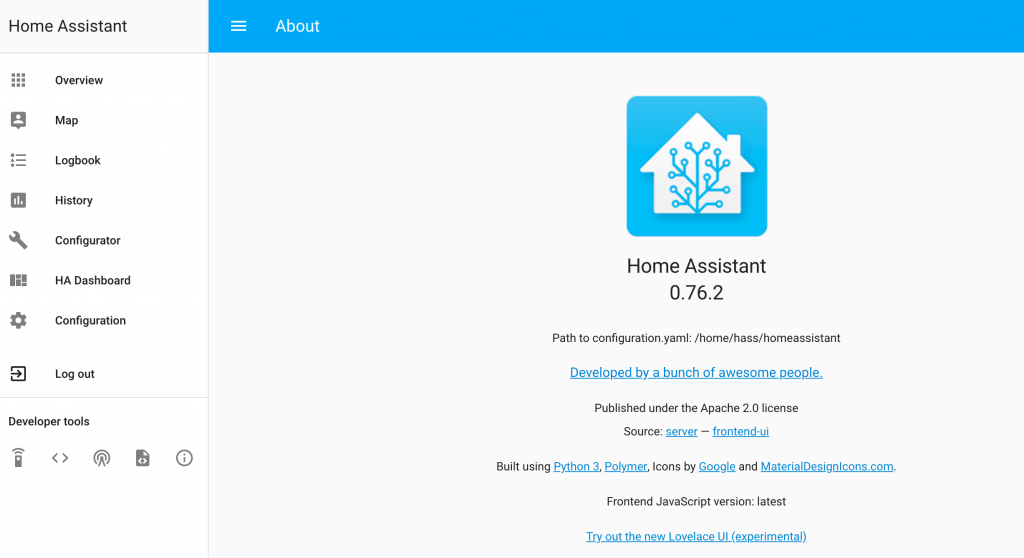 I came across this thread on the Home Assistant forum and it really is a very simple way to get an iocage jail with Home Assistant, HA Dashboard (using Appdaemon), and Configurator running simply by entering 2 lines at the CLI.

I’ve been playing a little with Home Assistant (HA) in the Docker container, but I was mainly copying commands from video tutorials on Youtube and didn’t really spend enough time understanding how the basic principles and foundation work.  Starting afresh in an iocage jail gives me the opportunity to do this, and with the Configurator application, I can also edit the .yaml files within the HA interface.  It’s also quite a good time to revisit this as a new interface – Lovelace – is being tested and will improve how HA looks.

One of the things I really want to try and do, but am struggling with at the minute it to display all of the emby entities in its own group.  I could do this by adding all of the entities individually, although these change dynamically and I’d always be having to add new ones in.  Ideally, I’d like to add a wildcard entity along the lines of media_player.emby* and it would include anything that matches this.  If anyone finds this and knows how to do it, please do leave a comment and let me know.

I love the idea of having a house floor plan with the home automation devices shown, including their current state.  I also like the concept of proximity, and knowing who is home or not, and if not where they might be local.  Probably not something all that useful at the minute as my daughter doesn’t have a mobile phone, but when she does I’d like that to be all set-up and ready to roll!

Anyway, not much more to add at this stage, as I’ve really just replicated the Docker setup in iocage, although I’ve understood how it all links together and have a better knowledge of how to add additional functionality once I’ve worked out exactly how I might use it.  I’ll probably buy a small Amazon tablet to use for HA Dashboard, although I can control the key light groups and switches on my Harmony Elite remote.  That really was one of my best technology purchases which I blogged about here.

Right, back to the puppy.  So excited that I can take her out for walkies next week.  It’s been a tough couple of weeks, but I feel the light at the end of the tunnel.  It’s probably another train, but at the minute I feel like I can handle it…